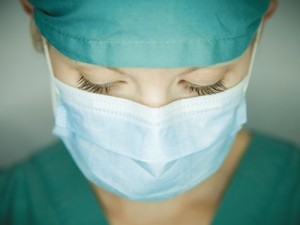 With many hospital staffing cuts today, professional nurses end up clocking in longer shifts and skipping breaks. And as the tragic story of Beth Jasper shows, it has horrible consequences.

Beth Jasper, a 38-year-old registered nurse at Jewish Hospital in Cincinnati, was one of the few nurses at that facility who was certified to work on the dialysis machines in the bone marrow transplant unit. In 2011, Jewish Hospital came under the ownership of Mercy Health Partners of Southwest Ohio and subsequently made staffing cuts.

This nursing shortage caused Beth’s shifts to be extended, routinely and significantly exceeding the hours for which she was scheduled.  Frequently, she was called into work during her off time and often asked to work extra shifts. She would work through her breaks and sometimes would hold off bathroom breaks for extended periods of time. She did inform her supervisor that she was under great stress and that she was “being worked to death.”

After a long shift, Beth was driving home in the early hours of March 16, 2013, when her vehicle suddenly left the road and crashed into a tree. She was survived by two children and her husband who has since filed a suit regarding her death. This is so tragic that it’s difficult for me to even write about this.

I’m not going to comment on the allegations in the lawsuit. What I want to share is that I am in no way blaming Beth Jasper for what happened. As nurses, we feel such a loyalty to our hospital or facility and such a dedication to our patients that sometimes we feel that we have no other choice. It’s a really difficult job market for nurses and nurses are afraid to even say something.

But what is known is that Beth was experiencing too much stress and that she was working an excessive amount of time. She knew she was not taking her breaks, not eating, and wasn’t even taking time to go to the restroom during her shifts. We also know that research shows that the quality of patient care drops when professional nurses are stressed out, burned out and work excessive hours.

So what can we do to avoid suffering the same fate? It starts with empowerment, something that no law can automatically guarantee. Always keep in mind these excerpts from the Empowered Nurses Bill of Rights:

Where I practice, the Indiana legislature has not mandated minimum staffing. But, if it did, would it help?  What if the patients have a much higher acuity? The minimum staffing could hurt us because based on acuity, we should have more staffing.

Are we going to let unions decide our fate? I am not sure if Jewish Hospital is unionized but I am aware that hospitals in Ohio are unionized.

Until nurses stand in their power and take control of their profession, nurses will continue to get burned out, unhealthy and sick. The worst part of it is that we are not able to provide the best patient care under those conditions.